The day my daughter Anna got her nose pierced, my husband Ken remained unequivocal on the subject. He told me that, “if you had had a nose piercing when we met we wouldn’t be having this conversation today.”

Obviously Dad had to be convinced that a small stud in the nose was in vogue rather than disgusting. As for me, I bought Anna’s argument that piercing her nose has been the only notable rebellious thing she’s wanted to do as a teenager. And she’d been lobbying for two years. “I have the perfect nose for it,” was one of her key points. “This is your face,” Ken shot back.

I was no help to the home team when I said, “I’d pierce my nose with Anna if it didn’t look so ridiculous on a middle-aged mom.” Besides, I grew up with Latina cousins whose ears were pierced at birth. My Latina mother wanted my ears pierced when I was a baby, but was met with heavy (read: hysterical) opposition from her American mother-in-law.

For two years Anna begged, argued, and yes, threw mild tantrums all in the name of establishing her own identity. She tried to highlight the fact that she would be 18 sooner rather than later and wouldn’t need our permission to pierce any part of her body. To her credit, she also said that she wouldn’t go ahead with the piercing at any age if Ken ultimately objected. When he heard that he got choked up and gave in to his little girl.

Anna did her homework. She found a reputable piercing/tattoo parlor to do the deed. Yes, piercings and tattoos seem to go hand in hand. But I don’t care how old my kids are, tattoos are not on the table at any age. The place that I’ll call I’m Piercing Your Daughter, Inc., looked reputable from its Web site. They’d been in business for over a decade and took pains to emphasize that everything—needles, studs, gauze—was completely sterilized and disposable.

I have to confess that I was feeling more and more nervous as Anna’s appointment drew closer. The waiting room at I’m Piercing Your Daughter, Inc. didn’t do much to put me at ease. It was decorated with scary wooden masks that sported creative ways to pierce the face. But at least I sat. Ken paced. Anna was too excited to notice anything. The song “Super Freak” was playing overhead. (I swear I’m not making any of this up.)

Owen, who was a walking advertisement for his profession, beckoned us into a private treatment room and carefully explained what he was going to do to our daughter’s nose. He was gentle and understanding as well as tattooed and pierced on every part of his body that was exposed to us. In addition to having his own nose pierced in a couple of places, he also had a nose bullring. Yes, his septum was pierced. I caught Ken staring.

Nose piercing is a quick, simple and relatively painless procedure. It took longer for all of us to take our places in the small room and still be able to hold hands. Anna held Ken’s hand and Ken held my hand. Owen pierced. Anna smiled. Ken flinched. And I realized I didn’t have what it takes to get my nose pierced after all.

Owen gave Anna a sheet outlining care instructions that she taped to her bathroom mirror. And the fallout? Not much to speak of. I’m hailed as a cooler than cool mom and Anna is the ultimate hipster, especially when she wears her black framed reading glasses. As for Ken, he’s secure in the knowledge that if Anna’s nose stud is removed, the hole will close up in less than a day. 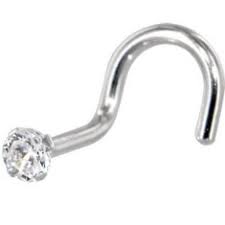