Help, thanks, wow. Those are the touchstones of prayer identified by the writer Anne Lamott. Lamott is a person of faith, a Christian who has something to say to everyone. The word “inclusive” comes to mind when I think about Lamott. She’s a church-going equal opportunity ecumenist, which is why I took so much away from her new book simply called Help, Thanks, Wow: The Three Essential Prayers. 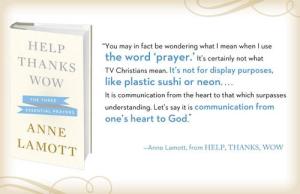 I can guess why Lamott set up three central points to rein in the overwhelming notion of prayer. She’s given her broad readership a user-friendly guide to the sacred trinity of Christianity. But she’s also given me, as a Jew, a way to think about Judaism’s formal schedule of worship. I read Help, Thanks, Wow within the framework of shacharit, mincha and ma’ariv—the set prayers for morning, noon and night that complement spontaneous prayer for reaching out to G-d.

Help-Shacharit.-Morning—Lamott describes calling out for G-d’s help as, “[t]he first great prayer.” To my mind this plea feels like a morning prayer. It’s so primal to shout, to ask, to whisper for G-d’s help.

Help me G-d. The days are so long when you are with young children. Ken travelled constantly when the kids were toddlers. Nothing struck fear in my heart quite as deeply as when I knew he would be away over a weekend. Weekdays we had a routine. Pre-school, scheduled naps, dinner at 5:30 and a couple of hours later a bath-induced sleepiness that gave way to bedtime. On the weekend time flowed like molten lava. Routines went out the window. And to top it off, I was outnumbered two to one. Twelve hours a day of non-stop hard labor.

And then my babies grew older and it got even more difficult. Help me G-d from pretzelitizing my children. “Pretzelitizing” is Anne Lamott’s word, a great word that says so much. Here’s a context for it: Help us G-d to witness the transformation of our children into the people they were meant to be before we pretzelitized them into high achievers, anxious, stressed-out automatons or “charming wired robots.”

Thanks-Mincha-Afternoon—Lamott describes the prayer of thanks as a chance for grace. And grace for her “can be the experience of a second wind, when even though what you want is clarity and resolution, what you get is stamina and poignancy and strength to hang on.” Thank you God.

I’m a morning person by necessity. Given my druthers, I’d stay up late and sleep late. With the morning obligations behind me, I welcome the afternoon. A second wind. When the kids were little, they sort of reliably napped in the afternoon when I could read or just think. Then they graduated to grammar school and my afternoon pick up made me realize how much I’d missed them during the day. Thank you, G-d for trusting me with these lovely children.

I also associate the teen years with the mincha part of my parenthood. It’s still broad daylight in terms of parenting, but there’s the heat of noon, the glare of the deep afternoon sun with which to contend. You can’t look directly at the sun in the afternoon and you can’t look straight on at your occasionally frustrating, obnoxious, glorious, I-really-wouldn’t-trade-this-kid-in teenager. Hormones, driver’s licenses, puppy love, first real love. Thankfully the teen years are a relatively short stretch of time and mincha is the shortest of the three services.

Wow-Ma’ariv-Evening—For better or for worse, another day in Kid Land signed, sealed and delivered to the annals of memory. Wow. Baby took a few steps into toddlerhood. Toddler grabbed words from here, there and everywhere and formed sentences. My boy wrote a fantastic short story with an imagination still pure and free of self-consciousness. My daughter has a fierce kick that gives her a leg up in a soccer game. Wow.

Some etymologists speculate that the word “wow” was once a blurry contraction of the words “I vow.” Here’s another lovely observation from Lamott: “The words ‘wow’ and ‘awe’ are the same height and width, all w’s and short vowels. They could dance together.” Indeed they could. Wow.

The rabbi pronouncing Ken and me husband and wife for the first time. Wow.  The look on Ken’s face as each of our children was born. Wow. Anna going off to her senior prom in a dress and hairdo to die for. Wow.  Adam writing my mother a lengthy note in her native Spanish wishing her a speedy recovery from surgery. Wow.

Wowwowwowwowwow. Strung together, the word is rhythmic, pulsating. Like a miracle it might respond to, wow has its own reverberation.

A Midnight Utterance-Amen. Amen the final word. It’s also from the Hebrew word emunah—faith.  Amen is a concise proclamation of faith in what has been expressed.  Amen completes us. Amen is certainty.

Amen is a response to this lovely, messy life that yields moment after moment of wows—moments that Abraham Joshua Heschel described as “radical amazement.”

1 thought on “Help, Thanks, Wow. And Amen by Judy Bolton-Fasman”