You came to the United States in 1958, a year before the revolution. Havana is an aerosoled city—Viva la Revolucion 54 is spray painted everywhere. It’s been fifty-four years since Castro came down from the Sierra Maestra Mountains and triumphantly marched into Havana on New Year’s Day. You once waved the Cuban flag for him. He was going to change Cuba for the better. Maybe he did for some people. But in the end your family fled along with 90% of the country’s middle class. You like to say that your mother packed a small bag and closed the door on forty years of her life at Calle Merced 20. 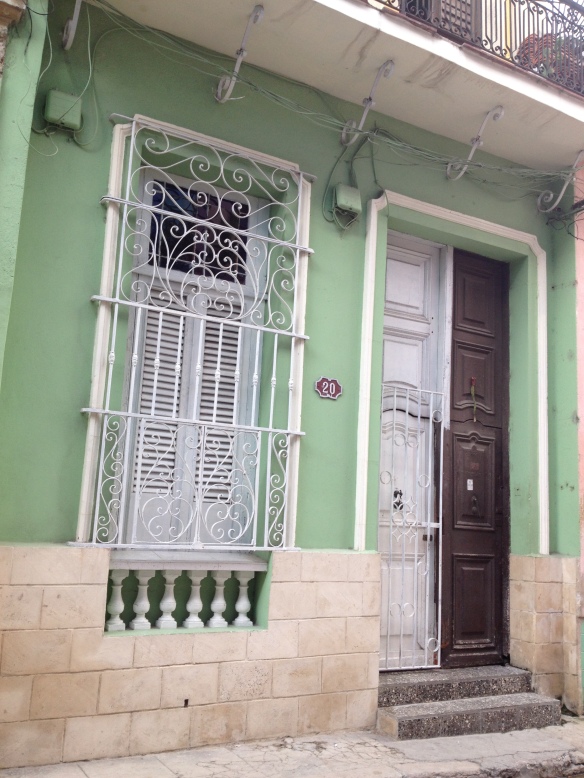 Calle Merced was a storied address in my childhood. It was Never Never Land, the place of your eternal youth. When I finally saw it a few weeks ago, the heavy wooden door you described was still there and I recognized the balcony from pictures you had shown me. You lived in Old Havana. But that too was consigned to fantasy. There were no marble steps that a maid had shined in your apartment. You lived simply on one floor, with a courtyard between the dining room and kitchen. Sometimes your mother brought home a live chicken and called the shochet – the kosher butcher – to slaughter it for the Sabbath meal. I imagine he did it right there in that open area between cooking and eating.

When I think of what is now our Havana, I envision the laundry on the balconies hanging like team pennants. But we are no longer divided into them and us. The people of Cuba hope and dream and cry with you for your country. How often did I hear you say in one long sigh – Hay Cuba como to estrano. I didn’t realize how much I missed Cuba too until I went there.

I saw the synagogue where you grew up. Women in the balcony, men gathered around a raised bima. I also went to the Patronato where you dreamed of being married before Castro took over the country. Your schoolmate Adela Dworin stayed in Cuba. She said that to be a revolutionary before the age of 40 is about passion. After 40 it seems like a foolhardy decision. Adela’s parents, who emigrated from Russia in the 1920s, stayed in Cuba because she was committed to the new socialism and they couldn’t bear another exile. Adela remembers you. Your old classmate is now the head of Cuba’s Jewish Community, much honored by Hadassah and others for her work with the country’s 1500 Jews.

There were only 11,000 Jews when you lived in Cuba, but you were a thriving community. Enough of you were committed to Judaism to fill five Ashkenazi and Sephardic synagogues. You had Hanukkah parties and Purim balls. That’s still happening, but the community is mostly growing through conversion and the number of functioning synagogues has dwindled to two. There’s an old joke that in the days when the revolution was in full bloom, a Cuban minyan consisted of nine people and a Torah.

A rabbi from Chile comes to Havana every six weeks to minister to the community. If someone is connected to a Jew, usually through marriage, they are encouraged to convert. This past Christmas over 70 people went into the warm ocean and immersed. When they came out they were Jews. There are over 140 children enrolled in the Albert Einstein Hebrew School. Some of those teachers are Jews by choice.

Havana is more beautiful than I had imagined. It’s in gorgeous ruins—an aging beauty queen who hasn’t lost her looks amid the rubble of benign neglect and abject poverty. The place is translucent with pastel colors and light. The outside of your house is a pretty light green. Green is your favorite color — the color of your eyes.

But the people are hungry. Rations are strict. The black market is darker than the Buena Noche, the Christmas Eve sky. People trade all kinds of things for an extra pound of meat or a cup of cooking oil.  Something as simple as a pair of jeans or sneakers that a relative in the States has brought gives a loved one a leg up in the barter system.

You should see the scene at the airport in Miami. Daily charters to Cuba all leave from the same place at Miami International and the check-in is transformed into a veritable marketplace. Cuban ex-pats going back for a visit have emptied Costco or Target or Best Buy, buying televisions, microwaves, bicycles, and air conditioners for their loved ones in Cuba. I saw my fair share of fishing reels too. That old chestnut of teaching a man to fish so he eats for life went through my mind like ticker tape.

God Bless America for all of her materialism and convenience.

“God Bless America,” that’s what my cab driver said in his fractured English as he drove me to the University of Havana. Aside from Calle Merced 20, that was the other place you wanted me to see. How you wish you could have studied at Alma Mater. Maybe you did or maybe you didn’t walk up its famous staircase.  You believed that you did, and that’s all that matters.

My cabbie leaned in close at a light and told me that from one Cuban to another, he was aburrido de esta vida. He prayed that his 30 year-old Russian Lada taxi would start each morning and that he’d catch enough fares to put food on the table for his kids. We both know that aburrido means so much more than just boredom. It’s a kind of lassitude mixed with the same Cuban melancholia I heard when you said how much you missed Cuba.

The driver had a mother-in-law in New Jersey who sent him money every once in a while. It helped more than I could imagine, he said. When I went to pay him he asked me if I had any medicine — aspirin, antacid, anything—that I could spare. He’d take it in lieu of a gratuity. I gave him a half-full bottle of Advil and a 30 percent tip. I had already donated all of the medicine I brought down to the pharmacy run by the Jewish community. The doctor who runs the operation has the same last name as your mother. “We’re all related,” she said jauntily.

Earlier in the day I had passed a state-run pharmacy where a woman beckoned me to come inside. I had an antibiotic prescription with me that I wasn’t going to use. Yes, she would take that, thank you, and did I also have pens to spare? I gave her what I had. She was about your age. Maybe you passed her on the street once upon a time.

“Tell your government we want to be friends again,” she said. “Tell your President Obama, embargo no.”

Aren’t you aburrida of the embargo too, Mamá?

*A version of this essay is forthcoming in the Jerusalem Report

1 thought on “*Dreaming in Cuban by Judy Bolton-Fasman”