Eve Ensler’s extraordinary new memoir begins with the body — her body — a place from which she was exiled and, “forced to evacuate when my father invaded then violated me.” As a consequence, she has focused her life’s work on reclaiming her body and helping others do the same. Her quest began by asking women about their vaginas. The urgency to “talk incessantly and obsessively” about vaginas stemmed from Ensler’s estrangement from her own body, and the stories Ensler heard lay the groundwork for her much acclaimed play “The Vagina Monologues.” 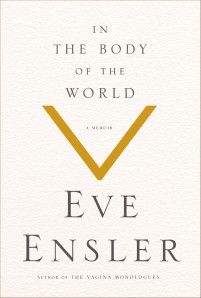 Over the years, Ensler has bridged the distance between herself and her body by traveling to over 60 countries to seek out stories of women who have experienced trauma. “These women and girls had also become exiled from their bodies and they, too, were desperate for a way home.”

The way home for Ensler took a devastating turn when she was diagnosed with stage IV uterine cancer in 2010 at the age of 57. But it was in the Democratic Republic of the Congo in 2007 where Ensler witnessed “the end of the body, the end of humanity, the end of the world,” and to which she returned to understand that her internal cancer and the world’s external violence were symbiotic.

“In the Body of the World” is not an easy book to read. There are horrific descriptions of the rape, torture, and mutilation of women and girls. But it is a necessary book to read for its fierce, passionate commitment to making the world a safe place for women.

In the Congo and then later in the hospital, Ensler considers the ways in which a life is ruptured by war crimes as well as disease. “Cancer,” she writes, “threw me through the window of my disassociation into the center of my body’s crisis.” And during her crisis she became one with the ravaged women of the Congo. The cancer that had blindsided Ensler leads her to explore the uncomfortable politics of advantage when she returns to the Congo. “My naked head suddenly feels like insane privilege — all the attention and care I have received. I am embarrassed by how much money (insurance), equipment, healers, surgeons, nurses, and medications have gone into saving me.”

Living in cities, amid concrete for most of her adult life, Ensler found that the tree outside her hospital window integrated her into the natural world. Too weak to do anything but stare out the window she writes, “on Tuesday I meditated on the bark; on Friday, the green leaves shimmering in late afternoon light. For hours I lost myself, my body, my being dissolving into a tree.” A tree also took root inside of Ensler in the form of taxol, a chemotherapy drug derived from tree bark.

Cancer initially divided Ensler from her body and the world until it united her with suffering across the globe. The scar that runs down her torso is the earthquake in Haiti. The abscess in her stomach with 16 ounces of pus is the contaminated Gulf of Mexico. In one of the many poignant scenes in the memoir, a friend of Ensler performs a healing ceremony in which she baptizes Ensler with flowers, honey, and water from the Gulf of Mexico. It’s the gulf where Ensler swam as a young woman. It’s the gulf where her dying parents gazed at the horizon. It’s the gulf of illness and recklessness and greed. It’s the gulf that drips down Ensler’s bald head.

Ensler’s closest women friends surround her throughout her cancer ordeal. This group is a microcosm of the City of Joy in the Congo, a concept that “grew out of the women of the Congo and was shaped by their desire and hunger. It was literally built with their hands. It is a sanctuary for healing: it is a revolutionary center.”

Ensler begins her intense, riveting memoir with the body, so it’s fitting to end with the body. Today she has “a second life,’’ and no longer needs a colostomy bag. Although cancer brought her to “dangling’’ on the edge of death, it was there, she writes, that “I found my second wind. The second wind arrives when we think we are finished, when we can’t take another step, breathe another breath. And then we do.” In celebration and camaraderie she dances with the women of the Congo in the City of Joy, finally reunited with her body.

This review was originally published in the May 17, 2013 edition of the Boston Globe