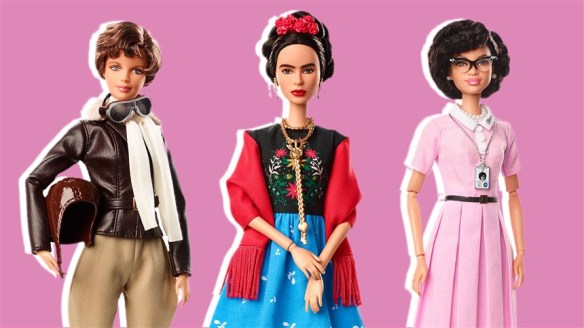 Barbie is back totally retooled and just in time to commemorate International Women’s Day on March 8. And this time she’s based on real life “sheroes”—a portmanteau of the words “she “and “hero” that refers to positive female role models—who include Amelia Earhart, Frida Kahlo and Katherine Johnson. Johnson was portrayed in the movie “Hidden Figures.” This makes the ever chameleon-like Barbie the first woman aviator to cross the Atlantic Ocean, a famous artist and activist and a mathematician who smashed gender and race barriers to work on sending the first United States manned flight into space.

The dolls will come with educational materials documenting the contributions that each of these women has made to the world. Johnson had major input in creating and designing her doll, ensuring that the resemblance was based on her real appearance.

By the time Barbie’s maker Mattel is done rolling out the entire series, 17 women will be honored. Little girls and boys will meet Chloe Kim who won an Olympic gold medal in snowboarding this year, British Boxing Champion Nicola Adams and Patty Jenkins, director of “Wonder Woman.” These Barbies are no longer my sister’s or my Barbie dolls. They’re not even my 23-year-old daughter’s Barbie dolls—dolls who had just begun to venture into the world as a doctor, an astronaut and a presidential candidate. Although 45 different nationalities claimed Barbie as their own, she was still the doll with the impossible measurements and the stiff rosy-lipped saccharine smile.

These new Barbie dolls are the happy result of a survey Mattel conducted of 8,000 mothers from around the world. It showed that 86 percent of these women worried that their daughters were not exposed to appropriate role models. Here is where I would like to point out that our sons should be exposed to those same role models. Barbie is not just for our daughters. She’s iconic, and her transformation has broken down gender stereotypes that must be equally impressed upon on our boys.

In the last three years, Barbie has undergone a sea change in both appearance and relevance. In 2015 Mattel introduced 23 new dolls with different skin tones, hairstyles and clothing. Most notably, Barbie had flat feet for the first time in half a century. She no longer had those pointy feet that could only fit into uncomfortable high heels. Barbie was going places.

In 2016, Barbie gained weight. She was now available in three new body types. She no longer had a cinched waist, a large chest or stick thin legs. Barbie was beginning to look like a real woman.

In 2017, Barbie donned a hijab. She was based on the Olympic fencer Ibtihaj Muhammad. The 31-year-old athlete was the first Muslim-American to win a medal at the 2016 Summer Olympic games. She was also the first American woman to wear a scarf while competing. Muhammad tweeted her thanks to Mattel and said, “I’m proud to know that little girls everywhere can now play with a Barbie who chooses to wear a hijab! This is a childhood dream come true.”

As excited as I am about the new Sheroes series, my first brush with this kind of Barbie occurred in the early 2000s, when she wore a pair of tefillin and a tallit or prayer shawl. She was dubbed “Tefillin Barbie” and I loved her. So did my daughter who was attending a Jewish Day School at the time. Mattel, however, did not manufacture Tefillin Barbie. She was the one-of-a-kind creation of Jen Taylor Friedman, a soferet or female scribe who writes Jewish holy texts by hand. It was so thrilling to see Barbie exemplify that there were no limits placed on how a woman practiced her Judaism.

A recent statement from Lisa McKnight a senior vice president at Mattel and the general manager of Barbie resonates for me. My only critique of it is that it once again bypasses the boys. “Girls have always been able to play out different roles and careers with Barbie,” said McKnight. “And we are thrilled to shine a light on real life role models to remind them that they can be anything.”

Amen to that and to the highest honor that Barbie now confers—a unique doll that resembles a real woman.