Lord & Taylor, once the grand doyenne of American department stores, is shuttering its remaining locations after nearly 200 years in business. My mercurial Cuban mother and I bonded when we shopped at Lord & Taylor, and its closing breaks my heart. Looking for the right dress for a special occasion, we were game to make the pilgrimage from Hartford, Connecticut, to Lord & Taylor’s flagship store in Manhattan on Fifth Avenue, between 38th and 39th streets, whether or not we had the money.

Other times, we took the Asylum Avenue bus that stopped across the street from our house, riding the two miles west to a Lord & Taylor satellite in suburban Hartford. That store was a chunk of white-brick elegance in an otherwise drab shopping center. Lord & Taylor stood out on that concrete strip as a mansion, a Mecca, a refuge. The lightly perfumed, gently lit spaces were all the more alluring for my mother after my parents fought over finances.

After many of those fights, my mother jumped on the bus with me in tow to empty my father’s coffers at Lord & Taylor. For my mother, it was revenge shopping at its most exquisite. Our first stop in the store was always the Bird Cage restaurant. We ate amid small wire cages dangling from the ceiling — intriguing mobiles in which pastel birds, against all reason, were real. The waitresses pushed carts offering tea sandwiches and precious desserts. Nothing was steaming; nothing was sliding down mounds of grease under those silver lids. Lord & Taylor was the epicenter of a well-mannered society.

After lunch, my mother and I headed to scout out the fancy clothes and shoes. There she wielded her hunter green Lord & Taylor credit card like a scythe with its white swirl of script that was the store’s distinctive signature. In raised letters, the card read: Mrs. K. Harold Bolton. My mother was the first in her Latinx family to marry an American. To her, Lord & Taylor was not about pretense; it was about aspiring to the best life. 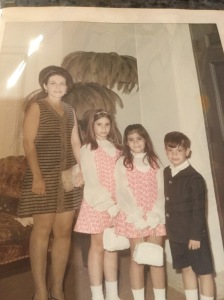 I remember when my mother found a suit in classic gray wool in that hushed fancy-dress section, with the sleeves, collar and skirt hem outlined in black gross-grain ribbon. The large stamped silver buttons commanded attention and respect. She bought the suit in a quick, blinding flash, and whenever she wore it, she felt rich. She initially hid it from my father in her closet, an island of eternal twilight and forbidden possibilities. Her closet was a place of mostly pretty clothes where I played dress-up — a place where I buried my face in the neatly folded hand-me-down cashmere sweaters from her sister-in-law.

Lord & Taylor eventually moved further west to the area’s first indoor mall, a place harder to get to for my non-driving mother. The store’s previous location on the bus line — the place that I had loved so much — evolved into the cluttered, fluorescent chaos of a discount store. Over the years, my parents continued to struggle financially and my mother grudgingly downgraded to other stores — perfectly nice stores that had neither the history nor what my mother called “the refinement” of Lord & Taylor.

I’m the one who now buys my mother her clothes at regular mall stores. When I bring the clothes to her nursing home, I stage a “fashion show” in her small, shared room. In her dotage, my mother has left behind her enigmatic and chic blacks and grays and embraced a red and green and blue palette. Her 100-year-old roommate, a fashion plate in her own right, wears a white denim jacket as she sits on her bed in anticipation of seeing the skirts and blouses I’ve put together — my mother has never, ever worn pants.

I may be my mother’s shopper, but I’ll never quite have her discerning eye. I try to create the excitement of those bygone big department store days in her 9-by-11 room as I hang up the new clothes. My over-the-top-cheer almost never works. My mother cries a lot. She misses her mobility. She misses her freedom to jump on a bus and shop to her heart’s content. She misses Lord & Taylor. With my father gone now, she misses being Mrs. K. Harold Bolton.

I will never tell her Lord & Taylor has closed forever.