Hallel Abramowitz-Silverman has a fervent wish—to see her younger sister Ashira celebrate her bat mitzvah at the Wailing Wall—the kotel. At just eighteen years-old, Hallel is one of the very public faces of Women of the Wall (WoW). For nearly a quarter of a century, the group has been advocating for women to pray as they see fit at the Wall—whether it be wearing tallitot—prayer shawls—or tefillin, or both. The founder of the group, Anat Hoffman, has consistently said that WoW’s goal is not to desegregate the Wall, but to make it a venue for all Jews. 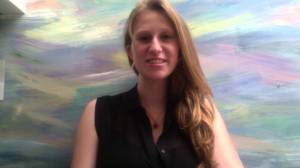 In the coming new year Hallel, who lives in Jerusalem, has her work cut out for her. The Israeli government has approved a plan set forth by cabinet secretary Avichai Mendelblit that effectively exiles women to pray “according to their custom” only in the Robinson’s Arch area, a small 400 square-meter space near the southern end of the Wall. Israel’s leading daily newspaper, Haaretz, reports that the proposal departs from Natan Sharansky’s plan to set aside an egalitarian space at the Wall. It also snubs a court ruling, which effectively allows women to read Torah and wear tallitot and tefillin at the Wall.

In the interest of full disclosure, I have loved Hallel since the moment I met her. Two years-old at the time, she was an adorable, mischievous tot with outsized glasses that matched her outsized personality. As passionate as I am about the issues attached to WoW, I am equally fascinated by how a young adult grows up to become an outspoken activist. I recently sat down with Hallel while she was visiting Newton. Upon her return to Jerusalem she will serve two years in the Israeli army. College is on the horizon as are opportunities she’ll seek out to help people in Africa.

As Hallel explains, “I’m from an activist family.” She and her family moved to Israel in 2006 from Newton where Hallel had attended the Jewish Community Day School. The family first settled on Kibbutz Ketura in the Arava desert and then moved to Jerusalem three years later where Hallel just completed high school. Her interest in WoW was piqued.

When I heard that women were not allowed to pray their own way at Judaism’s holiest site, I decided to go and pray with WoW. That was in Adar—last March just before Purim. I fully understood what was happening to Jewish women at the Wall when I saw the violence and the cruelty fellow Jews did to one another. All of this was happening in a Jewish country because Jewish women wanted to wear a tallit.

Hallel has clear role models for her activism. Her father Yosef Abramowitz is an advocate for global solar power through his company Energiya Global. Abramowitz’s own fight for social justice goes back to his days at Boston University when he urged the administration to divest its investments in companies doing business in South Africa. He was also a student leader in the Soviet Jewry movement in the early ‘80s. Hallel’s mother is Rabbi Susan Silverman, who is an international advocate for adoption and has written a memoir about the spirituality of adoption. Rabbi Silverman is one of the faces of WoW, and she and Hallel were among the ten women arrested at the Wall for refusing to take off their tallitot.

The women were eventually released and Hallel got to work on brokering a solution for all women who worship at the Wall. “I knew I couldn’t see my nine year-old sister get spat on again. Nor could I allow another friend to get hit with a rock.” She took her fight to the Israeli Parliament and to the press. She wrote an open letter to Natan Sharansky, a former Soviet refusenik and a member of Israel’s cabinet, who was appointed by the prime minister to find a way for peaceful prayer at the Wall. “I am a stakeholder in your decision,” Hallel wrote to Sharansky. “In other words, I am a Jew. A Jew who prays with other women at the Kotel.”

Among Hallel’s solutions was to establish a tri-chitzah. Derived from the word mechitza or divider, Hallel suggested that,

It only seems fair to divide the Wall into three equal sections; men, mixed and women. And since there is no Jewish ritual for which men get arrested then clearly equality mandates that there should be no Jewish ritual that should land any woman in prison.

Although women have been granted the right to wear tallitot at the Wall, the future for a pluralistic Judaism there is dubious in light of the Mendelblit plan. Yet Hallel is optimistic. “We are a colorful circle among a sea of monochromatic black and white,” Hallel notes. “After the first month it was legal to wear our tallitot, two [ultra-Orthodox] seminary girls came up to me and said we really appreciate what you are doing. If I had a doubt in my mind, it was squashed. I need to keep fighting for these girls.”