It had been forty years since my last violin lesson when I went this summer to rent a violin to start up again. I glimpsed the stock room where there were hundreds of violins, still and gleaming and soundless, coming together in a symphony of silence.

My father and grandfather loved playing the violin and they wanted me to love making music too. Each of them practiced with me often, and one of my earliest memories is of my father tucking my tiny, quarter-sized violin under his chin to tune it. He aimed to give me, his tin-eared daughter, a fair start.

My violin tuned, my dad then perched the small instrument on his lap. “I can’t believe they make them this small,” he said. By his own description he had me “later in life” and I imagine he said the same thing about me when I was born.

I started violin lessons when I was eight. When I was fourteen I handed my father back the full-sized violin I had finally grown into. I was not a musician.

My Grandfather Bolton also began violin lessons when he was eight. His family cut the household budget razor-thin to give their promising young son music lessons. When Grandpa touched bow to strings his parents heard his talent and though they may not have understood it that way, my great-grandparents sensed that Grandpa’s musical ability coupled with America’s social mobility would enable him to move ahead in this country at dizzying speed.

At the age of 14, my grandfather debuted at a tony Connecticut country club. In his unpublished autobiography he wrote that he went to his first gig in a sleigh and was woozy from the cold until someone warmed him up with a hot toddy. It was the first time he was drunk.

My grandfather chronicled his sparkling immigrant story on legal-size loose-leaf pages. Grandpa’s faithful secretary typed draft after draft of a book he simply entitled Memoirs. With each pass, Grandpa further sanitized his history, hoping to make his life as all-American as the cars he drove. 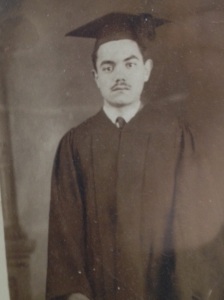 William M. Bolton was born in 1891 in Ukraine and came to the United States when he was six months old. He saw the advent of the automobile and the refrigerator. He wrote about his father’s trips to the icehouse in the family’s horse-pulled cart for blocks of ice to store dairy products. But he wrote nothing about the poverty in which he grew up.

Grandpa fiddled his way through Yale by joining the musician’s union to pay his college tuition and to buy the “right clothes” to go to classes with the likes of Cole Porter. I imagine that Cole Porter played his piano in the rarefied company of Yale’s sons while Grandpa played at dances in fraternity houses to which he would otherwise never be admitted. He was silent about Yale’s anti-Semitism in the early 20th century. By the time my paternal grandparents met during Grandpa’s junior year at Yale, they had deliberately forgotten that they came to America from Russia as babies.

I’m not sure what my father and grandfather would make of Thanksgivukkah, this once in a century, possibly once in a millennium holiday. They loved America fiercely and unquestioningly. They may have thought the whole idea was kitsch. Certainly the name is as cumbersome as their Judaism was to them. Or they may have felt vindicated by the fuss over the confluence of this American holiday with an ancient Jewish one. My grandparents were assimilated to the point that they traded the white and blue flame of a Hanukkah menorah for the red and green glitz of a small silver Christmas tree propped on a coffee table.

But I think I’ve figured out my grandparents’ story. When I had begun to play the violin my parents went to see Fiddler on the Roof. They came home with a recording of the show’s song that I played in an endless loop on our hi-fi. Zero Mostel boomed about a fiddler just like Grandpa, the fiddler who hovered over my childhood like a Chagall painting.

My grandfather fiddled to keep his balance as he took on the mantle of a navy blue, Ivy League life. To start over he changed his name from Bolotin to Bolton. But despite those dramatic attempts at fitting in, I think my father and grandfather were Thanksgivukkah Jews. They aspired to have the best of what America offered. But in the end their descendants celebrate Hanukkah over Christmas.

The Talmud states that “parents bring a child into this world but a teacher can bring a child into the World to Come.” As I was searching for this quote on the Internet, in its idiosyncratic wisdom, Google also pointed me to the saying that a father is obligated to teach his son to swim.

On the surface, these two Talmudic directives seem to be at odds with each other. The first asks parents to give over their child to a teacher for a proper education. The second is a handson command to teach a child a basic survival skill. But walk into Dr. Jonathan Garlick’s research laboratory at Tufts Dental School and the two dictums come seamlessly together.

Garlick is a professor of oral pathology and the head of a stem cell research laboratory, for which the ultimate goal is “using [stem] cells for personalized therapies for regeneration and repair of diseased or damaged tissues and organs. [And] to develop novel applications for artificial skin made in the lab that closely mimics the form and function of this human tissue.”

“Science is about communication,” says Tufts University Professor Jonathan Garlick.
In short, Garlick harvests stem cells that allow him to model the way your skin behaves. But read the summary of his research closely and you’ll pick up subtext that the two Talmudic dictums suggest: designing experiments that further our understanding of how stem cells can be used to fight disease and developing the hands-on laboratory protocols that are required to expand that knowledge. As novel and innovative as Garlick’s scientific work is, there is something else just as extraordinary happening in his laboratory: He is deliberately and effectively training the next generation of scientists and science-literate students. And he is capturing their hearts and minds while they are still in high school. There has now been a long line of Gann Academy students and others, including my children Anna and Adam, who have completed immersion programs in Garlick’s laboratory specifically geared to pre-college students. It began when Garlick welcomed high school seniors from Gann into his workspace through Ma’avar – the school’s six-week externship program. The experience proved to be so powerful for both the students and Garlick that he went on to design a two-week immersion experience for high school students in the summer.

Garlick is passionate about his work and dedicated to his mission “to be an incubator for student learning of all ages. This isn’t just about research, but about the broader impact of science in their lives. I want kids to converse in science, and by that I mean that I want to inspire them to be empowered citizens in ongoing conversations about science.”

Garlick’s vision of educating students is couched in the Jewish values that he holds dear. He explains that his research with stem cells is a type of regenerative medicine that he views as “molecular ‘Tikkun Olam’” – he sees replacing damaged cells with cells that he grows in the laboratory as contributing to healing the world.

Garlick recognizes that aspects of stem cell research are open to public debate. He says that his mandate to teach science to younger generations and beyond evolved from his experience as a stem cell researcher. He observes that his work is often surrounded by “moral, political and legal issues that have a direct impact on scientific research. I needed to learn about these broader impacts in order to better understand how social, moral, philosophical and ethical issues that are grounded in science can play an increasingly larger role in our contemporary lives.” To that end, Garlick relishes teaching students how to wrestle with issues at the interface of our capabilities and conscience while also emphasizing respectful debate.

“Science,” notes Garlick, “is about communication. There is value to communication and teamwork when doing scientific research.” Students in his laboratory also learn that they have personal stakes in the work to which they are exposed. Garlick cites the human genome as a prime example. What does a researcher, an insurance company or, for that matter, a private citizen do with the information that is generated? With whom do we share it? What is confidential and what is public? What does one do when she learns that she may be at risk for a particular disease?

“I teach my interns about probabilistic information versus deterministic information, judgment versus uncertainty,” says Garlick. “It’s crucial to help these students develop powers of discernment to appreciate the broader impact of this technology in their lives.”

As with much of science, failure is a “welcomed part of the experimental learning process. We get unexpected results. In fact, at times, we don’t get it right, but every result has a purpose and kids end up using critical-thinking skills to teach each other.”

In addition to growing stem cells, Garlick emphasizes that he is cultivating a culture of “derech eretz” – respect – in his laboratory. “Mutual respect and collaboration is a value that transcends cliques in high school. We engage individuality for the greater good. And that individualism has meaning and value whether it is from a 10th-grader or a postdoctoral student. My goal is to humanize the science.”

Jonathan Garlick’s dedication to nurturing the next generation of scientists and informed citizens brings to mind another Talmudic saying that joins the work of teachers and parents: “The world endures only for the sake of the breath of schoolchildren.”