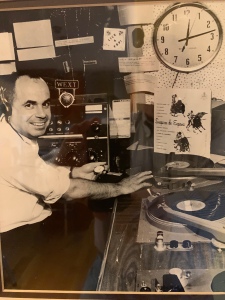 This year marks my late father’s centennial. He was born in January of 1919 in New Haven, Connecticut on the second floor of a two-family house. Woodrow Wilson, the stony-faced Princetonian, was the president of the United States, negotiating placebo treaties in top hat and tails.

This was an era when modernity and Puritanism mingled as child labor laws, pure-food laws, free love, free verse and Prohibition were all in play. The gross national product had tripled and the national debt had gone from one billion to 24 billion dollars. A jury acquitted eight baseball players from the Chicago White Sox of throwing the World Series to the Cincinnati Reds, but barred them for life from playing baseball.

Mobility was on the rise — faster cars, changing neighborhoods, increased consumption. Toys, stocks and birth control were for sale; my grandparents bought all three. Energy was abundant and houses were wired for electricity. Cars reached speeds of forty miles per hour. Life was moving fast and my Grandpa and Grandma were early adopters of the changes that went with it.

By 1919 the First World War was over, but the Bolshevik Revolution was in full swing. My father lived his entire life with Russia menacing him. He inherited his patriotic DNA from his father. America was everything to my grandfather, who changed the family name from Bolotin to Bolton to ensure that his children assimilated even further into American life. This was a country that had enabled my grandfather, an immigrant from Ukraine, to receive a high-profile education at Yale and in time to send his only son to the same institution.

Beginning in the summer of 1919 my grandparents rented a beach house in Old Saybrook, Connecticut — a town name that sounded fresh and breezy. A town that accepted the Boltons over the Hurwitzes, relatives who tried to rent there too. My grandfather had the chutzpah to pass, the nerve to hobnob with the sons of Connecticut Yankees.

My grandfather did well in the stock market. He drank illegal liquor to keep warm at his alma mater’s football games. Walter Camp, the father of American football and the coach of the Yale team, introduced calisthenics and packaged them to America as the daily dozen. Hemlines rose, although my grandmother still could not vote.

The tango was a forbidden dance. Ragtime was considered “black music,” yet too good to not to be played; a Jew named Irving Berlin wrote Alexander’s Ragtime Band. Thirty years later he sealed his fame with a song called White Christmas.

My father lived his entire life in the land of the free and the home of the brave, but he wanted to distinguish himself from his father who was exempt from serving in World War I. The Second World War was my father’s grand, personal adventure. He served on a naval supply ship in WWII, drifting and dreaming and ultimately steaming ahead on the Pacific Ocean to magical places like the Philippines that his father could only imagine.

He married my Cuban mother who was two decades younger than he was. She periodically inspired him to set aside his American ways and allow the dream-laden music of Spain to animate his soul. The clashing percussion of bullfight music and rousing zarzuelas brought out a life force in him he otherwise rarely showed the world.

He took his love of Spanish music to the airwaves for two hours on Sunday afternoons to broadcast a show simply called “The Music of Spain.” My father had somehow collected hundreds of imported records with covers showing bullfights and ladies dressed in mantillas. All of this happened from the Hartford, Connecticut studios of WEXT, a country-and-western music station that donated space and time for community programming during an otherwise dull, blue-law day of the week.

In a black-and-white picture of my father as a DJ, scattered white lines break up the photograph’s glossiness. My father wears a no-nonsense white shirt, black pants and a five-o’clock shadow even though the clock in the picture is just coming up on 12:15 p.m. In his left hand is a stopwatch. Behind him are consoles with large buttons and instruments to gauge sound levels — instruments that look as if they belong in a war room rather than a radio station. Two turntables unfurl the music. There is a record cover propped in front of him, announcing in a ribbony script: Suspiros de España, Spanish marching music that has an accompanying pasa doble, a two-step dance that acts out the drama of the bullfight. My father is smiling, a toothy grin that announces his happiness born of music and memory.

“Caballeros y damas,” he says into a large microphone suspended from the ceiling. Gentlemen and Ladies. His voice pours out of the radio and fills the house; his heavy American Spanish so distinctive from my mother’s light velvety version. We three children gather around the radio with my mother and thrill to the sound of my father’s voice. In that moment, he is a celebrity.