I’ve been thinking lately about a line in the blessing for every bar or bat mitzvah at my temple, which declares, “And may your proud parents be with you when, in your own time, you stand under the huppah with your beloved.”

The power of that sentiment rests with the key words, “in your own time.” On the face of it, the message is that we’re not rushing our children to marry. But when I dig a little deeper for the subtext of that phrase, I find how crucial marriage is in Jewish life and to Jewish continuity. Its import is such that we begin to remind our children about it on the cusp of puberty.

According to the rabbis and Susan Patton, timing is everything in the marriage arena. Who is Susan Patton? She’s the Jewish mother of two young men and “the Princeton Mom” who wrote a letter to the undergraduate women of her alma mater a couple of years ago, encouraging them to be actively looking for husbands while still in college. Patton’s letter, published in the Daily Princetonian, went viral and according to her new book, Marry Smart: Advice for Finding THE ONE,” it garnered over a 100 million hits on the Internet. From there it was a quick jump to the morning shows and then on to expanding her thesis into a 200-page book. 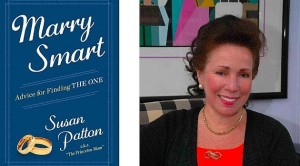 It’s easy to criticize Patton. She writes in rhythm to women’s “ticking biological clocks,” which she mentions early and often in her book. She tells young women—women just entering college—to think seriously about their life plan if they want to have children. To be smart at 20 is to realize that in 15 short years marriage prospects and fertility are severely diminished.

Whether it’s true or not, Patton makes me want to scream, “Slow down lady!” She writes that, “It’s never too early to start planning for your personal happiness and looking for a husband who will respect you.”

Patton admits that her book is highly anecdotal—a forum really for her blunt instructions on how women can avoid ending up childless and sad in their thirties. Although she acknowledges that her methods are not for every woman, she blithely assumes that ever woman’s happiness is predicated on having a husband and children.

Patton’s advice not only seems plucked from a different era, it’s sexist for the way she puts the onus on women to hunt for mates in college as intensely as she-lions scour the jungle for food. Yet for marriage-minded young women, Patton makes sense to some degree. During the college years there is a ready-to-date collection of age-appropriate men who are intellectual and social equals. Where things get ugly is when Patton tells a young woman she’ll never look better than she does when she’s 20. And if she’s not looking her best she might endeavor to do so with the help of plastic surgery or a serious makeover. But chip away at some of Patton’s ludicrous and sometimes offensive layers of advice on how to reel in a man and I think you have a well-meaning, albeit misguided Jewish mother.

When I walked down the aisle at the age of 30, I knew that I had won the marital lottery. And it’s true that when I looked around at my reception, I saw that a good number of my 30-something girlfriends—gorgeous, smart, talented women who wanted to marry—still hadn’t found their besheirt, their destiny. Over the past couple of decades some have fallen in love and married, some have taken matters into their own hands and become single mothers and some have abandoned their dream altogether of having a family.

At my engagement party, one of my friends asked me “How did you know Ken had the potential to be so adorable?” It only took a good haircut and a trip to the optician to spiff up my handsome groom. Patton would call him a diamond in the rough. Maybe so. But he wasn’t very hard to spot when I was 29.

I probably could have skipped some of the adventures I had in my early 20s. But without those formative experiences would I have been ready for an amazing man like my husband? I can’t answer that with any certainty. Will I sit my own daughter down and tell her that 75% of her time on campus should be spent actively looking for a husband? I don’t think so. But I will echo some of Patton’s advice on our hooking-up culture and the emotional fall-out from meaningless sex. I won’t put it in the same irritating terms as Patton does when she invokes the old chestnut of why buy the cow when she’s giving away the milk for free. Our daughters are not cows.

The big takeaway from Patton’s bluster is that young women should not be afraid or bullied into thinking that wanting marriage and a family is a second-class alternative. What is shameful is not honoring all of the choices that women make for their happiness.

And yes, God willing, I do look forward to being a proud mama under the huppah.

On Dec. 14, 2012, 20-yearold Adam Lanza entered an elementary school in Newtown, Conn., and gunned down 20 children and six school workers. He had also committed matricide before he turned the gun on himself.

Although 28 people died that day in Connecticut, 26 is the symbolic number etched on every memorial commemorating the tragedy. It’s the number of times church bells tolled in its aftermath. It’s the number of stars affixed to the roof of the local firehouse. And it’s the number that President Barack Obama invoked on the first anniversary of the shootings.

After reading Andrew Solomon’s powerful interview with Peter Lanza – Adam’s father – in a recent issue of The New Yorker, there is no question in my mind that Lanza commemorates the number of victims at 26. “You can’t mourn for the little boy [Adam] once was. You can’t fool yourself,” he told Solomon.

It’s fitting that Lanza broke his media silence with Solomon who, among his many journalistic and literary accomplishments, has championed the joys and difficulties of parenthood. Last year I wrote about Solomon’s book “Far From the Tree” for this column. The book was an 11-year undertaking in which Solomon vividly portrayed children who were born or grew up in ways that their parents never expected. It included a chapter about parents whose children became criminals, focusing on the parents of Dylan Klebold. Klebold, along with his friend Eric Harris, killed 13 fellow students at Colorado’s Columbine High School in 1999.

Solomon’s portrayal of the Klebolds impressed Peter Lanza as fair and just, and when he was ready to talk, he reached out to Solomon. Lanza’s confidence in Solomon is well placed. Although the latter’s carefully reported piece directs a reader’s attention to the fact that things were amiss with Adam Lanza from an early age, he resists the temptation to regard Adam’s deterioration as foreshadowing the horror to come. Solomon further notes that the state’s attorney report found that the mental health professionals who treated Adam throughout his teen years did not predict his future criminal behavior. What strikes me in reading Solomon’s article is how hard Peter and Nancy Lanza tried to save their son, and how dangerous parenthood becomes when a child is as far gone as Adam was.

Adam’s anti-social behavior escalated in middle school and he was diagnosed with Asperger syndrome when he was 13. To be clear, Peter Lanza vehemently objects to any speculation that Asperger’s factored into Adam committing mass murder. “Asperger’s,” he told Solomon, “makes people unusual, but it doesn’t make them like this.”

Solomon similarly goes to great lengths to document that Asperger’s was not connected to Adam’s murderous rampage. “Violence by autistic people,” he explains, “is more commonly reactive than planned – triggered, for example, by an invasion of personal space. Studies of people with autism who have committed crimes suggest that at least half also suffer from an additional condition – from psychosis, in about 25 percent of cases.”

Among the other rumors swirling around the Lanzas was that Peter was an absent father. Nancy and Peter Lanza separated in 2003, when Adam was 9, and divorced in 2009. According to Solomon, the Lanzas were amicable when it came to Adam and his older brother. Peter saw his sons every weekend and, as four binders of printouts of emails from 2007 and 2008 suggest, was in constant contact with Nancy about Adam’s worsening condition.

Media reports noted that Nancy and Adam regularly went to the shooting range. Peter Lanza doesn’t overtly comment on the role that Nancy’s guns played in Adam’s psyche. Nor does he blame her, the custodial parent on the front lines, for Adam’s crimes. In that same forgiving spirit, Solomon observes that Adam overwhelmed Nancy and that her instinct was to indulge him.

“All parenting,” Solomon writes, “involves choosing between the day (why have another argument at dinner?) and the years (the child must learn to eat vegetables). Nancy’s errors seem to have been that she always focused on the day in a ceaseless quest to keep peace in the home she shared with the hypersensitive, controlling, increasingly hostile stranger who was her son.”

In the wake of the shootings, Peter Lanza has met with two of the victims’ families. But as Solomon reports, “The only reason that Peter was talking to anyone, including me, was to share information that might help other families or prevent another such event.” For his part, Peter says, “I want people to be afraid that this could happen to them.’”

No matter how vigorously Peter Lanza has looked for answers, there is only one chilling conclusion that he comes to: he wishes that his son had never been born. For the rest of us, we’re left wondering what we as parents would do if we were confronted with a child like Adam Lanza. There is no definitive explanation for what Adam did even as scientists analyze his DNA – just a haunting feeling that a parent’s responsibility can be both awe-inspiring and terrifying.