This month, Jewish astronaut Jessica Meir added to my love of all things space and NASA. She and her sister astronaut, Christina Koch, took a seven-plus hour jaunt outside the International Space Station to perform maintenance. The 7-year-old space fan in me resurfaced when I heard about this first all-female spacewalk. 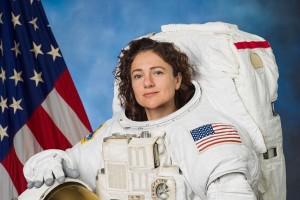 I have always imagined space as a black galaxy flecked with infinite stars and dreams and prayers. Space was the place God inhabited. Miracles were shipped down to earth from there. As a little girl in the 1960s and ‘70s, I couldn’t get enough of the NASA launches. There was the rumbling of the rocket engines. The release of orange fire provided the momentum for a spaceship to pierce the earth’s atmosphere. I was mesmerized by images of the Gemini and Apollo launches on a black-and-white television. Those events were almost as exciting as my birthday. I was ecstatic when I heard the scratchy, disembodied male voices connecting the earth to the heavens. Now I am thrilled at the sound of women’s voices transmitting from space.

I loved watching the astronauts of Apollo 11 set foot on the moon’s dusty crater-pocked surface for the first time. The whole endeavor was wild and wonderful. It was 1969, and I had not yet flown on an airplane. As far as space was concerned, my body and soul were blank slates.

In March 1970, space was back in my life during a moment when day became night. It was a solar eclipse. My father, the NASA maven, prepared for it by buying us three kids and my mother plastic sunglasses to shield our eyes in the unlikely event we were exposed to the blocked sun. “Looking into the face of an eclipse can blind you,” he said. I sat frightened on the sofa with my feet sticking out at a 90-degree angle. I didn’t trust those small sunglasses to protect me against the fierce sun. I shut my eyes tightly until I saw a gathering of swirling light.

Meir, who is 42, is the fourth Jewish woman, 15th Jew and first Swedish woman—she holds dual American and Swedish citizenship—to participate in a space mission. She may also become the first woman to walk on the surface of the moon. At this time, she is among 17 candidates who are being considered for NASA’s Artemis program. From Greek mythology, Artemis was Apollo’s twin sister, the goddess of the hunt and the patron of women. Meir may do a moonwalk in a few years; the space agency has announced there will be another one in 2024.

Space and moon exploration may have a Jewish antecedent. In the Bible, Joshua begged God to still the sun in the middle of a battle. God heard his pleas, and the day stopped. Only the moon continued to move, slipping in front of the sun as it did for me on that March day of my own solar eclipse.

And now there is Jessica Meir. Her Iraqi-born Jewish father immigrated to Israel and fought as part of the Israeli Defense Forces in the 1948 War of Independence. He met Jessica’s mother in her native Sweden. The family eventually settled in Caribou, Maine. Although Meir’s mother did not convert to Judaism, the family identified as Jewish and attended synagogue. Meir was quoted in Kveller as saying, “Personally, I’m not really a religious person, but I think my Jewish cultural background is obviously a big part of my culture and especially traditions.”

It is standard for an astronaut to take three personal items on a mission. On her mission, Meir brought an Israeli flag, a pair of socks with images of menorahs and, according to The Forward, a painting of a phoenix by the late Rona Ramon, widow of Ilan Ramon, the first Israeli in space. Ramon, along with six crewmembers, died in the Columbia Space Shuttle disaster in 2003.

Meir is not the first Jewish astronaut to bring Jewish items to space. Ramon brought a drawing by a 14-year-old boy trapped in the Theresienstadt Ghetto during the Holocaust. He also carried with him a miniature Torah smuggled out of the Bergen-Belsen concentration camp. Other Jewish astronauts have transported a mezuzah, shofar, dreidel and small Torah complete with breastplate and traditional pointer.

As a child, I had always hoped that just as Moses had glimpsed the back of God’s head, the astronauts would see a defining part of God, however briefly. Maybe someday they will. In the meantime, I squeeze my eyes shut this time to conjure sparks of the Divine.